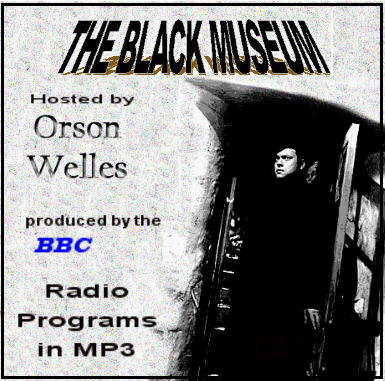 Opening in 1875, the Crime Museum at Scotland Yard is the oldest museum in the world purely for recording crime. The name "Black Museum" was coined in 1877 by a reporter from "The Observer", a London newspaper, although the museum is still referred to as the Crime Museum. It is this museum that inspired The Black Museum radio series, produced in London by Harry Alan Towers.

The series continued to be offered in syndication and was heard on AFRTS broadcasts and in the US on NPR stations through the 1960's, 70's and 80's. Some shows were broadcast by the BBC in England in 1994.

This murder mystery series was based on true life cases from Scotland Yard's files. Each episode was based on an item or items of evidence in the museum.

Orsen Welles hosted and narrated the shows. Mr. Welles opened each show slightly differently but followed a standard format. For example, the show, "The Bathtub", open as follows:

"This is Orson Welles speaking from London." (Big Ben starts himing in the background). "The Black Museum, repository of death... Here, in this grim stone structure on the Thames which houses Scotland Yard, is a warehouse of homicide, where everyday objects, a piece of wire, a chemist's flask, a silver shilling, all are touched by murder." (dramatic music)

Following the opening, Mr. Welles would introduce the museum's item or items of evidence that was central to the case, leading into the dramatization. He also provided narration during the show and ended each show with his characteristic closing from the days of his Mercury Theater of the Air, remaining "obediently yours".

Harry Alan Towers produced the series from scripts written by Ira Marion. Music was composed and conducted by Sidney Torch.

The museum was not open to the general public. It's purpose was then, and still is, for police training, although it did receive a considerable number of famous people, including Sir Arthur Conan Doyle. It is currently used as a lecture theater for the police and like bodies in various subjects of Criminology. But, thanks to Mr. Towers and Mr. Welles, we can still get a glimpse of what secrets are housed in The Black Museum. OTRR Release Information:

Reviewer: Offramp - favoritefavoritefavorite - May 24, 2016
Subject: One At A Time, Please!
I tried to like these as well. They are technically very good but if once listens to a lot of them sequentially serious problems become apparent.

First is that blaring music, which cuts in at every opportunity. It is NOT original music. I have heard it on other American radio series of the 1950s. It is just music sellotaped in to wherever the producer felt it should go, and taped in as often as possible ro fill in the gaps.

Secondly, the music brings me to another problem. Welles's dramatic delivery allied with the music constantly give the impression that the show is just about to end.
There might be 10 minutes left when Welles says, "...And that shoe is now an exhibit in The Black Museum" DA DA-DA-DA DADA!!!! But it is not the end, there is ages to go.

And lastly the stories, despite that blasting Dizzy Gillespie-ish refrain, are not that dramatic. They are about as dramatic as Dragnet but without that excellent series' tension and ambience. Some of these Black Museum stories are about the murder of someone like Mrs Buckley on her remote farm in Lincolnshire.

But I never hear people reminisce about the show. I only discovered it here on archive.org.

I think this is because the show doesn't have a human center. It's like Dragnet without Joe Friday. But, if you can live with this flaw, it is some of the best old-time radio you will ever hear.
Reviewer: spook1958 - favoritefavoritefavoritefavoritefavorite - August 19, 2012
Subject: Black Museum was Produced in Sydney Australia not London
Black Museum was produced in Sydney by Creswick Jenkinson on behalf of Towers of London. It had a top line Australian cast including Joe McCormick and transplanted U.S. actor Harp McGuire. It was deliberately produced for sale to the U.S. Orson Welles introductions were recorded on tape in London and flown to Australia to be added to the locally recorded performances.

This was the first series to be produced in Australia in this way. Harry Towers had visited Australia in the late 1940's and set up production facilities in Sydney. He also used a lot of Australian actors in his London productions and distributed Australian produced shows like The Sundowners in England.
Reviewer: nighthouse66 - favorite - January 1, 2011
Subject: I Tried-
..to like these, i have been listening to them over the past few months and i just haven't been able to find a truly creepy, interesting one out of the bunch. I am a fan of Orson Welles, especially his radio work, but these just strike me as tepid. I like "Whitehall 12 12" much more, though those can also be somewhat hit or miss. Wish Orson did more than narrate....
Reviewer: Poe1809 - favoritefavoritefavoritefavorite - October 23, 2010
Subject: ..
I don't necessarily disagree that the shows aren't creepy in the way some other shows are, but these aren't fictional tales designed for that purpose. They are, however, creepy as hell when you look at them from the perspective of actual events.